By: ClearwaysAccountants|Published on: May 19, 2016|Categories: Clearways News| 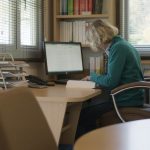 My office is now a film star!

Last week a film crew of three arrived to film my office – it is going to be the star of the “Smart Offices” marketing campaign.  The office has already appeared in The Times and The Telegraph and now the marketing is going on YouTube too.

Although I have worked at Sky, being based in the tax department, we never really saw much of the filming side of production.

The team used all sorts of equipment including lighting, light reflectors, hand held and slide mounted cameras.  They even interviewed me!

The best bit without any doubt was the drone, a neat little device that took some great film from more unusual angles.

I’ll share the footage and Smart Offices video once it goes live and we are truly film stars!