Setting up a Business – Creating a limited company 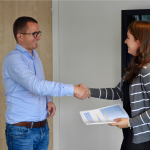 When setting up a business you have several options on what trading structure you use. See our blog on being a sole trader. Here we look at setting up a limited company and what you need to consider.

Another option apart from setting up as self employed (as a sole trader) is to form a limited liability company; this does what it says, it limits your liability.   Your liability for any errors is limited to the assets of the company rather than you personally; assets would include equipment, machinery and cash.

So let’s consider Mark, he’s a medic who is going to leave the NHS and set himself up in private practice providing botox to celebrities.  He is very concerned that if something goes wrong or there is a problem with a batch of botox he purchases that his customers will sue him, not only for the costs but for damages.  He has a list of celebrities that will use his services but he doesn’t want to be personally liable for any problems so he decides to set up a company.

In small companies these three sets can all be the same person.

Mark, our medic, is married so after advice he decides to set the company up so he owns most of the shares but his wife owns some as well.  The company is set up otherwise known as incorporation at Companies House with 100 ordinary shares, Mark owns 80 and his wife owns 20.  This allows both Mark and his wife to take dividends out of the company.

Mark sets himself up as the only director.

He will need to open a company bank account and then he can start to trade.

Once you have incorporated a company the only way you can take money out of it is by:

This date determines when various documents have to be filed with HMRC and Companies House:

Unlike self-employed Jane Grey who we mentioned in the ‘working for yourself’ blog post, Jane operates her gardening business as a sole trader, Mark our medic is working for the Limited Company he and his wife own.

As a director, he can set his own salary and he may also choose to receive benefits in kind such as medical insurance. In the main it is more tax efficient for Mark to pay himself a low salary, up to the National Insurance threshold which is before he starts to pay any National Insurance, and to purchase the benefits privately.

Any further income that Mark wants to receive is better taken as a dividend out of the company’s profits.  Dividends are paid to the owners of the company, the shareholders.  In this case, Mark and his wife.

The director could also take a loan from the company but this has a sting in the tail!